Possible changes in the course of the reform of the prosecutor's office are becoming more and more visible today, and let`s be honest, they are definitely alarming

Liudmyla Ievsieienko, Director of the Innovation and Development Foundation-Ukraine brought up this issue in her column on “Ukrayinska Pravda” and stressed that the reform of the prosecutor's office should be continued and the public should be involved as much as possible.

The goal of the reform is to radically change the standards for the activities of prosecuting authorities; to make the prosecutor's office effective and respectful; to raise its prestige for work and fair career opportunities and professional development.

Dry statistics showed: after the first stage of the reform of the Prosecutor General's Office, of the 1083 prosecutors who filed applications for attestation, three stages, 610 prosecutors successfully passed all three stages, which is 56%.

Now, there is a second stage of prosecutorial reform. More than 90% of regional prosecutors participate.

The experts of the Innovation and Development Foundation have initiated an All-Ukrainian public campaign to gather information on the integrity, professionalism and ethics of candidates to regional prosecutors offices and have already obtained preliminary results. 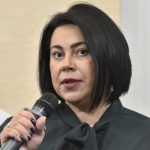 “Candidates to regional prosecutors offices who have so-called risk factors – it can be large amounts of real estate, a lot of cars, having been involved in major corruption scandals - have not even submitted their application for the attestation.
And this is an extremely cool indicator, as it shows that these prosecutors understood that they would not be able to explain the origin of their wealth to the Committee during personal interviews. So the reform is going in the right direction”,

By the way, now that we are all waiting for the interview phase with candidates to regional prosecutors offices, we can also send information about the integrity, ethics and professionalism of regional prosecutors either to the email of the Innovation and Development Foundation, or to the official mail address of the Prosecutor General's Office.

Such information can be useful to both working groups that will review regional prosecutors and to staffing committees that will directly interview candidates.

“The information may relate to undeclared property, a way of life that does not correspond to the official income of the prosecutor and his family members, involvement in corrupt practices, compliance of the prosecutor's behavior with the requirements of professional ethics, and other violations of the legislation of Ukraine.
We are convinced that the public has something to say about regional prosecutors, and it is already talking when conducting investigations or revealing some previously unknown information.
It is extremely important that the process is transparent and involves as many people as possible”

The Innovation and Development Foundation initiated an All-Ukrainian public campaign to collect information on the integrity, professionalism and ethics of candidates to regional prosecutors offices.