In November 2015, Innovations and Development Foundation started development of the next generation, decentralized, blockchain-based e-Auction system. The platform is built to support non-corrupt, transparent privatization process of state and regional property, as well as land and enterprises. The system is completely self-sustainable. As profit for electronic trade platforms comes from users through the registration of payments.

The first phase of the project was launched in cooperation with the President's Administration of Ukraine in 2016, though included various governmental bodies and several regions of Ukraine as well. 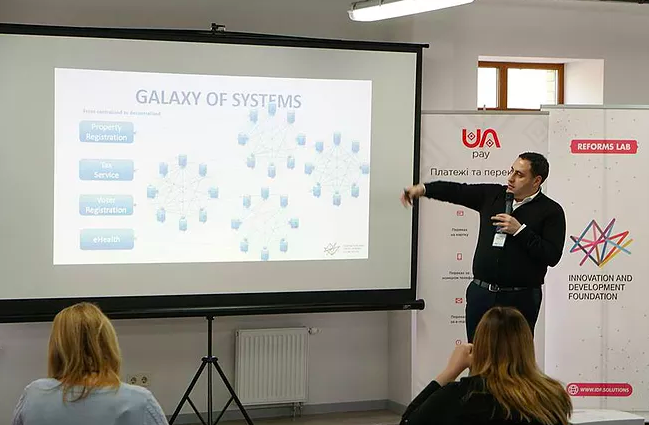 IDF launched the project in June 2016 in collaboration with the presidential administration of Ukraine, together with various government agencies from several regions of the country.

Signing of the memorandum on the development of state electronic auctions on Blockchain Technologies was the key to implement the initiative.

Consequentially, the world’s first blockchain auction took place in Ukraine. As the part of the pilot, bidders were putting the bid to buy tickets to a major IT conference.

The system of decentralized auctions was planned to be used in state services of privatization and lease of state assets, licensing.

In 2019, "PaySpace Magazine" named "e-Auction 3.0" one of the seven pride drivers of the Ukrainian fintech market over the last decade.